Brazil's vicious cycle: breaking out will be hard to do

Brazil's vicious cycle: breaking out of it will be hard to do

Brazil's public finances are stuck in a vicious cycle but the comprehensive reforms needed to break out will be difficult.

In 2020, the Brazilian government significantly increased spending in order to mitigate the economic repercussions caused by the Covid-19 pandemic. This led to a whopping 9.4% deficit on the primary balance (government balance excluding interest expenditure). The primary balance is considered a key indicator for assessing future debt sustainability.

The government used a 'state of calamity' clause in order to temporarily exceed the constitutional expenditure ceiling, which stipulates that federal non-interest expenditure must not exceed inflation. The ceiling, passed in 2016, provides an anchor for fiscal consolidation, and is therefore a crucial element for restoring confidence in Brazilian public finances. This confidence was badly hit by looser fiscal policies under the Rousseff administration (2011-2016) and the 'Lava Jato' corruption scandal that began in March 2014.

In the years prior to the pandemic market confidence in government finances slowly rebounded, due to adherence to the expenditure ceiling and a landmark pension reform passed in October 2019. This allowed the central bank to cut the benchmark policy rate - the Selic - to a historical low of 2% in August 2020, compared to 14.25% in 2016. In turn, the monetary loosing was good news for Brazilian government finances, which are highly sensitive to shifts in the Selic rate. Despite an increase in government debt from 78% of GDP in 2016 to 88% of GDP in 2019, the interest burden decreased. The effective interest rate (roughly the annual interest payments on outstanding debt divided by the debt itself) on government debt declined from 13.1% in 2016 to 5.7% in February 2021. Interest expenditures decreased as well, from 6.5% of GDP and 21% of government revenues in 2016 to 4.2% of GDP and 14% of revenues in 2020. All this improved debt affordability and market confidence in Brazilian public finances. The 5-year credit default swap (CDS)-spread, a risk indicator of Brazilian government debt default, decreased from 240 basis points end of 2016 to below 100 ahead of the pandemic outbreak in early 2020.

However, despite declining interest expenditures, government finances are still vulnerable. With an estimated 91% of GDP in 2021, the government debt ratio remains substantially above the IMF's threshold of 70%. Interest expenditures are still among the highest in the world and significantly above average for emerging markets and Latin America (see chart 1). As a result of Covid-19 related spending, the financing needs of Brazil's government jumped from 14% of GDP in 2019 to almost 24% in 2020. This is substantially above the emerging markets average of 17% of GDP and the threshold of 15% that the IMF considers as sustainable. 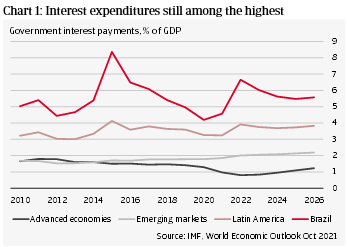 Brazil's government finances are largely financed in domestic currency by its residents, but due to three reasons they have become more dependent on market sentiment over the past couple of years. First, an increasing share of government debt is financed at relatively short maturities. The average duration of debt has fallen since 2016, from 4.8 years to 3.6 years in March 2021. Second, the share of floating rate debt is relatively high (currently abound 30%). And third, as a result of the former two reasons, an increasing part of public debt is directly linked to the Selic rate (currently 37%, up from about 25% in 2016).

As market sentiment is shifting and inflation expectations are rising, the government is confronted with higher interest rates. Brazil's inflation accelerated to 10.7% in October 2021, far exceeding the upper ceiling of the central bank's 2.25%-5.25% target range. Higher inflation reflects currency depreciation and rising food and energy prices due to the worst drought in almost a century (Brazil is highly dependent on hydropower) and ongoing supply chain disruptions. In response, the Brazilian central bank lifted the Selic rate several times since March 2021, to 7.75% in October. This made it the first in the region to start its rate hiking cycle and also by far the most aggressive. Additional increases can be expected in the coming months, which could lift the Selic rate above 10% in the course of 2022, higher than currently foreseen by the central bank and the IMF and implying a restrictive stance.

Rising policy rates translate into a higher effective interest rate on government debt, which increased from its low of 5.7% in February 2021 to 6.8% in September. This turning of the interest rate tide against Brazil's highly interest-sensitive government finances has raised concerns that the normalisation of Brazil’s policy rates will destabilise them. Worries about the credibility of the spending ceiling are adding to these concerns, as the government used the 'state of calamity' clause again this year, confronted with a second wave of Covid-19. Additionally, the upcoming general and presidential elections in October 2022 will make fiscal consolidation harder. The concerns are also reflected in the CDS-spread, which rose from below 100 basis points just before the outbreak of the pandemic to more than 200 basis points in October 2021 (see chart 2). 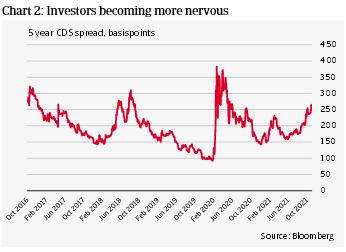 Considering the lack of any major fiscal consolidation, government debt will remain high in the foreseeable future. Some even fear that Brazil will have to restructure its domestic debt in order to reduce its financing needs and to improve its debt sustainability. Although such restructurings are rare, they have occurred more often than generally thought, also in Brazil. Between 1983 and 1990, Brazil's sovereign defaulted several times on its local currency domestic debt through abrogation of inflation-linked indices embedded in the original contracts (most of Brazil's sovereign debt obligations at the time were indexed to inflation).

However, we consider such a restructuring as highly unlikely in the current situation. Despite the ongoing challenges, Brazil's macroeconomic environment is currently more stable compared to the 1980's, when it was characterised by hyperinflation, an overvalued currency and high current account deficits. Macroeconomic policies have improved and domestic financial markets are more developed, allowing the government to borrow mostly in its own currency from residents. The central bank has become independent (formalised this year by a constitutional amendment), and the flexible exchange rate can be used as a shock absorber.

Brazil's authorities need to act in a credible way to reduce the concerns about the sustainability of its government finances. Theoretically, there are three ways to bring government finances into more stable waters. First, Brazil could try to inflate debt away with higher inflation. Second, it could grow out of its debt by increasing real GDP. Third, Brazil could try to stabilise debt by fiscal consolidation, reform efforts and privatisation.

The first option is not a viable solution. This year's high inflation indeed did help to reduce the government's debt to GDP ratio, but it also raised social pressures, as rising prices severely hit the poorer part of the population. Growing out of the debt problem with higher annual real GDP expansions is not a realistic option for Brazil's low growth economy. While it recovered faster from the pandemic than expected, high growth is not likely to last. The impact of growth drivers will fade, while higher interest rates and declining confidence will start to bite. Economic growth forecasts for 2022 have therefore been cut significantly: GDP is expected to decelerate to 0.6%, and to average around 2.5% in the coming years.

The third option - reforms and fiscal consolidation - seems the only credible way forward. We expect the primary deficit to decrease significantly to an estimated 1.2% of GDP in 2021, as Covid-19 related measures will be reduced, revenues will rise as the economy recovers, and the current high inflation pushes the denominator up. The IMF concluded in September 2021 that Brazil would need to move to a primary surplus of 1.1% of GDP in 2026 in order to stabilise the debt ratio around this year's level (see chart 3). Compliance with the expenditure ceiling from 2022 onwards would be a necessary condition to make this feasible. However, it might not be sufficient, as the stronger than expected interest rate hikes could result in higher than current forecast interest expenditures and fiscal deficits. Moreover, in order to put the debt ratio on a downward trajectory, Brazil would need fiscal reforms, such as improving the highly complex tax system and reducing mandatory public spending, in particular the high wage bill, which is at almost 14% of GDP significantly above the 9% emerging markets average.

Reform efforts are slowed down by political issues

However, passing such reforms is not easy in low growth economies such as Brazil, while vested interest will slow progress. Proposals for the administrative reform, aimed at reducing mandatory spending (which accounts for almost 93% of federal primary spending) are stuck in Congress due to strong resistance from unions. Meanwhile, the reform window is narrowing in the run-up to the October 2022 elections.

Forced by the markets, since summer 2021 Brazil has made some steps on the reform path, but any major reforms will most likely be put on hold until the next administration takes office. For instance, privatisation has started when Congress approved the part-privatisation of state-owned electricity company Eletrobrast. Additionally, regarding the fiscal reforms, the tax simplification reform has been cut into several pieces, with those only requiring a simple majority in parliament to be discussed first, while the wider-ranging ones that require a constitutional majority will probably have to wait. While fiscal reforms are advancing, the gradual reform pace has failed to sufficiently comfort investors so far.

Rising political uncertainty over the past months has added to market concerns that the spending ceiling will be breached again in 2022 for the third year in a row, or will be even abolished altogether. Former president Lula da Silva (2003-2010), who is running again and currently leading in the polls, has criticised the spending cap and privatisation efforts. Moreover, statements by President Bolsonaro to increase social spending as part of his re-election campaign have fuelled market anxiety, due to uncertainty about the funding. Market concerns are reflected in indicators such as the exchange rate, 10-year government bond yields and the CDS-spread. While generally volatile, those are on a clear upward trend since end of June 2021.

This is creating a vicious circle, in which the risk of higher fiscal deficits and a depreciating currency are adding to inflationary pressures, forcing the central bank to lift interest rates (see chart 4). Higher interest rates in turn weigh negatively on GDP growth, government finances and further fuels market anxiety.

Although fiscal consolidation is not popular in election years, the alternative of higher inflation and interest rates, coupled with lower GDP growth, is not attractive either. Striking the right balance between satisfying voters and comforting investors by safeguarding the stability of government finances will be extremely difficult in Brazil's highly polarised political landscape. Therefore, the country will most likely continue to deal with this vicious cycle ahead of the October 2022 elections. The winners will determine the prospects after the voting, but risks remain to the downside, due to the ongoing political challenges in implementing comprehensive fiscal reforms.

Brazil's vicious cycle: breaking out of it will be hard to do

As vaccination campaigns are underway, the world economy is recovering from the pandemic. Advanced markets generally have higher vaccination rates than emerging markets

Climate change and its impact on country risk